The Research Alliance for New York City Schools, a member of the CTE Research Network, is conducting a series of studies that leverage the scale and diversity of NYC’s CTE system to learn about the conditions under which CTE is most effective. This work is being supported by grants from the Institute of Education Sciences (IES) and the Laura and John Arnold Foundation. In the following post, the Research Alliance team explores students’ interest in CTE programs by examining the choices and characteristics of more than 350,000 students who applied to NYC high schools during the last decade. (View the first blog post in this series.)

The past decade has seen renewed interest in career and technical education (CTE). States and school districts across the country have invested in a new generation of CTE programs, aimed at preparing students for both college and a career. In New York City, in 2018, there were 124 high schools[i] offering at least one CTE program of study, ranging from culinary arts and hospitality to nursing and web design. These programs were offered in high schools that are dedicated to providing all enrolled students with a sequence of CTE courses, and in traditional academic high schools where CTE is one of a range of options (read more about NYC’s changing supply of CTE programs in our previous post.)

While CTE has been the focus of increased attention and investment, we know relatively little about student “demand” for CTE, and how it has evolved in recent years. Which students are interested in and applying to CTE programs? And how are these students different (if at all) from those who prefer more traditional high school options?

This blog post addresses these questions, exploring the choices and characteristics of students who applied to NYC high schools during the last decade. NYC’s high school choice process requires that every 8th grader submit an application ranking up to 12 high school programs they would like to attend in any of the City’s five boroughs. An algorithm then uses these rankings, available seat counts, and the schools’ admissions priorities to assign each student to a school.[ii] Ultimately, most students (about three quarters) are matched to one their top three choices.

Who Is Applying to CTE?

NYC’s high school choice process presents some challenges to identifying applicants to CTE programs. In their high school choice applications, students apply to programs within schools. These programs have specific curricular themes. In high schools that offer CTE programs, the program theme is often clearly connected to a specific CTE program. But in some cases, the connection is less clear, making it is harder to assess students’ choices—or the opportunities they will end up taking advantage of once they are enrolled. For the purposes of this study, we did our best to “cross walk” administrative program codes with recognized CTE programs of study to assess whether students were in fact “choosing CTE.” In future work, we will explore the extent to which students did in fact pursue CTE opportunities once they were in high school.

The Research Alliance analyzed application data for 354,108 students who participated in NYC’s high school choice process between 2008 and 2017. Our findings suggest that a high number of NYC students apply to high school programs offering CTE. As shown in Figure 1 below, well over three quarters of students listed at least one CTE program on their high school application (see the purple line on the graph indicating “any CTE”). This pattern held true throughout the entire decade. In 2017, the most recent year for which we have data, 83 percent of students included a CTE program somewhere on their application.

Students with moderate interest in CTE, according to our definition, accounted for the largest share of high school applicants, by far, throughout this period. A smaller percentage of students demonstrated high CTE interest (between 4 and 9 percent each year). In 2017, about 62 percent of all NYC students had moderate or high interest in CTE, meaning they included at least one CTE program among their top three choices for high school. 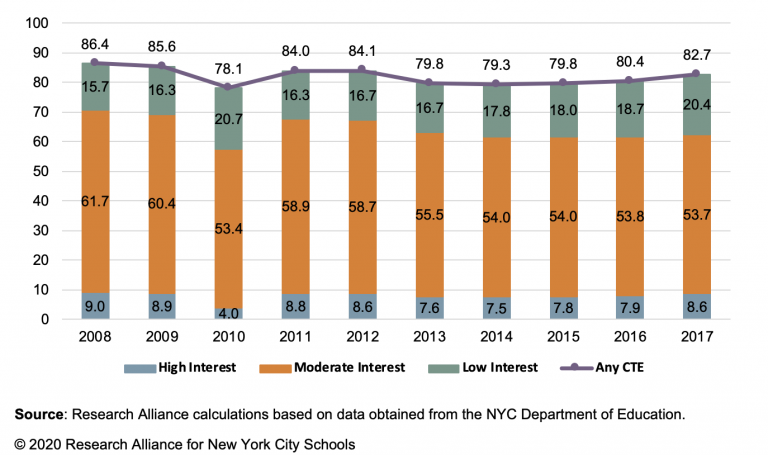 It is important to note that we don’t actually know whether students selected CTE programs because of the focus—or because they were drawn to some other aspect of the program (e.g., admissions criteria, graduation rates, location, size, etc.). It is probably reasonable to assume that students whose top three choices were all CTE were making that decision intentionally. It’s harder to discern the preferences of students who selected a mix of CTE and non-CTE options; thus, our “moderate interest” category should be interpreted with some caution.[iii] (See “The Challenges of Identifying NYC’s CTE Choosers” textbox, for more information.)

What Are the Characteristics of Students Who Choose CTE?

As a next step in our analyses, we were interested in learning whether students with moderate or high interest in CTE were different from those who had little or no interest in attending a CTE program. The figures below explore levels of CTE interest among various student subgroups (defined by race/ethnicity, gender, the borough where they live, and various other characteristics). Here, we focus on the most recent five years of high school application data.[iv] 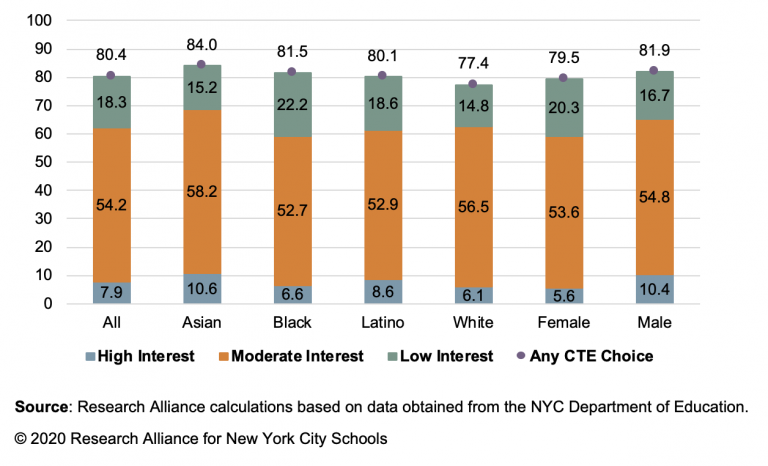 Girls were much less likely than boys to show high CTE interest (5.6% of girls vs. 10.4% of boys selected CTE for all three top choices). Girls and boys had relatively similar rates of moderate CTE interest (54 and 55 percent respectively). About 21 percent of girls included no CTE choices on their application, compared with 18 percent of boys.

Figure 3 shows more substantial differences associated with students’ home borough. Students living in Queens and Staten Island had the highest levels of CTE interest, on average. About 81 percent of those in Queens and 79 percent of those in Staten Island selected at least one CTE program among their top three choices. This was only true for 63 percent of students in Brooklyn, 44 percent in the Bronx, and 39 percent in Manhattan. These patterns partly reflect differences in the supply of CTE programs across boroughs. For example, many of the large comprehensive high schools in Queens and Staten Island provide opportunities to pursue a CTE program of study. In contrast, high schools in the Bronx, Manhattan, and (to a lesser extent) Brooklyn tend to be smaller, and fewer of them offer CTE programs of study. 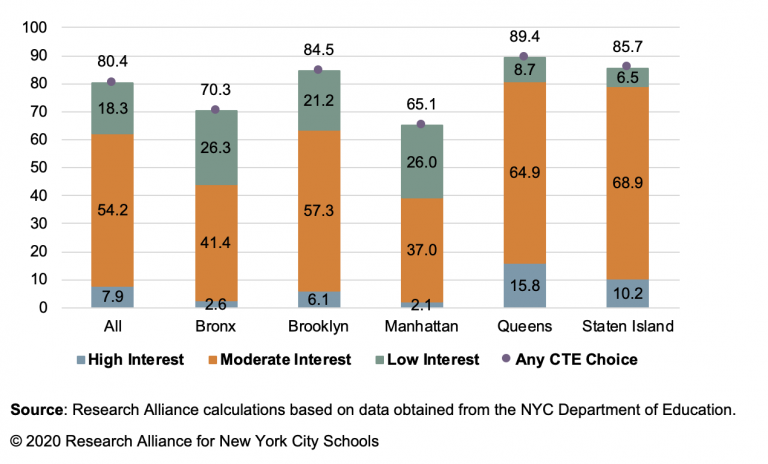 As shown in Figure 4, other student characteristics were not associated with large differences in CTE interest. For instance, English learners and non-English learners had similar levels of CTE interest. Students in poverty and students with disabilities were about 2 percentage points more likely than their peers (i.e., those without a poverty indictor and those not eligible for special education, respectively) to include one or more CTE programs among their top three choices. 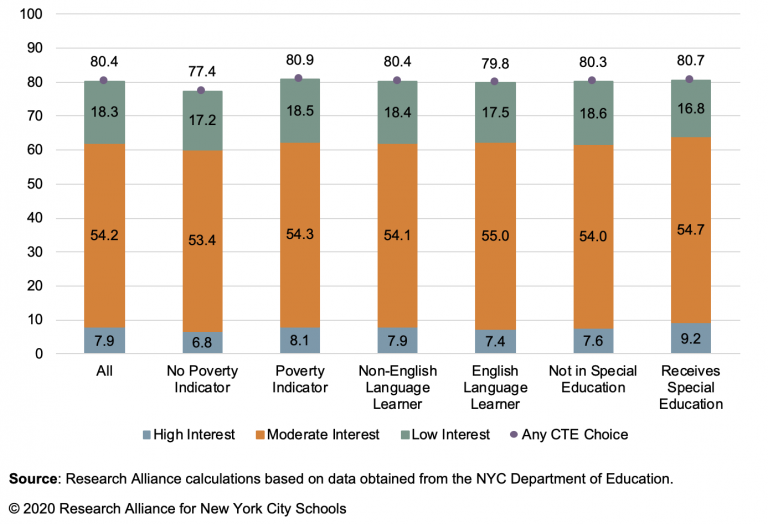 These findings raise important questions that our research team will be exploring in future work, such as:

This post previews findings from a forthcoming paper examining both the supply and demand for CTE in NYC—and a larger ongoing study, in which the Research Alliance is using the scale and diversity of NYC’s CTE system to learn about the conditions under which CTE is most effective.

i Out of 432 high schools citywide.

ii At screened schools, the school’s ranking of the student is also a factor in admissions.

iv We chose to focus our subgroup analyses on this more recent period, because—as we noted in our prior post—NYC implemented a new system of oversight of its CTE programs beginning in 2013.