The Research Alliance for New York City Schools, a member of the CTE Research Network, is conducting a series of studies that leverage the scale and diversity of New York City's CTE system to learn about the conditions under which CTE is most effective. This work is being supported by grants from the Institute of Education Sciences (IES) and the Laura and John Arnold Foundation. In the following post, the Research Alliance team explores how CTE program offerings have evolved in New York City during the last decade. (View the second blog post in this series.)

How has the supply of career and technical education changed over time in NYC?

In recent years, there's been an increased focus on career and technical education (CTE) in public schools across the country. Many states and school districts have invested in CTE programs aimed at preparing students for both college and a career after high school. As home to one of the largest and most diverse systems of CTE programs in the country, New York City provides a unique opportunity to learn about CTE innovation on a large scale as well as the conditions under which CTE programs are most effective.

Drawing on early findings from an ongoing Research Alliance study, this post examines the City’s changing supply of CTE programs during the last decade. CTE programs in NYC are offered in two main settings: high schools that are dedicated to providing all enrolled students with a sequence of CTE courses, and traditional academic high schools where CTE is one of a range of options. (Students access programs in both types of schools through a universal high school choice process.)

To receive certification from New York State, CTE programs must:

Generally speaking, CTE programs in NYC aspire to meet these criteria, but not all of the programs included in our study have been state certified.

As described below, the landscape of CTE programs in NYC has shifted considerably during the last decade—including changes in the number of programs being offered, the proportion of programs in CTE-dedicated versus traditional academic high schools, and the representation of various career themes within the City's CTE portfolio.

The Number of CTE Programs

Beginning in 2013, the NYC Department of Education enhanced its systems for documenting CTE program quality. This work put the district in a position to provide technical assistance and support to CTE programs that were progressing toward mandated standards of practice and to remove programs that did not provide the requisite CTE program features. As a result, over the course of the next two years, there was a steep decline in the number of CTE programs available in NYC. This was particularly true of programs in traditional academic high schools (the number of such programs was cut nearly in half between 2013 and 2015). 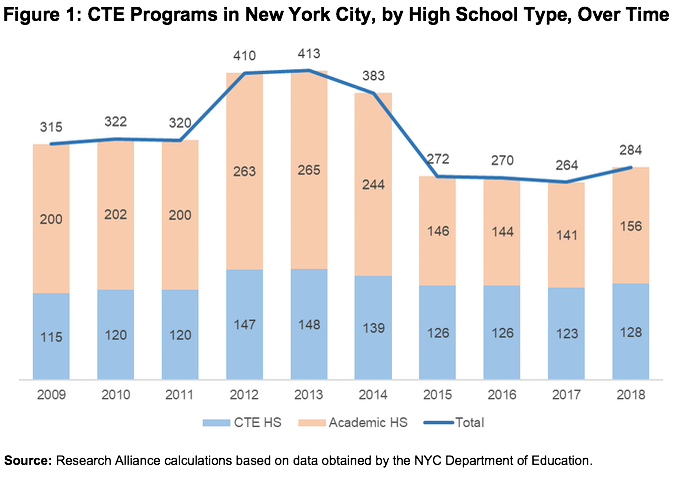 Federal and state officials organize CTE programs into "career clusters" that identify their primary vocational focus.[i] In Figure 2, we examine the distribution of programs in NYC by career cluster at two points in time: 2009 and 2018. We find some notable changes during this period. In 2009, the most prevalent career cluster was engineering and technology, at 34 percent of all CTE programs. This was followed by business and information systems (22% of all programs), human and public services (21%), arts and humanities (13%), and health services (9%). By 2018, the supply of engineering and technology programs had increased to 43 percent of CTE programs in the City. Conversely, the share of programs associated with business careers had declined by 9 percentage points (to 13%). Programs in human and public services also declined slightly (from 21 to 18%). 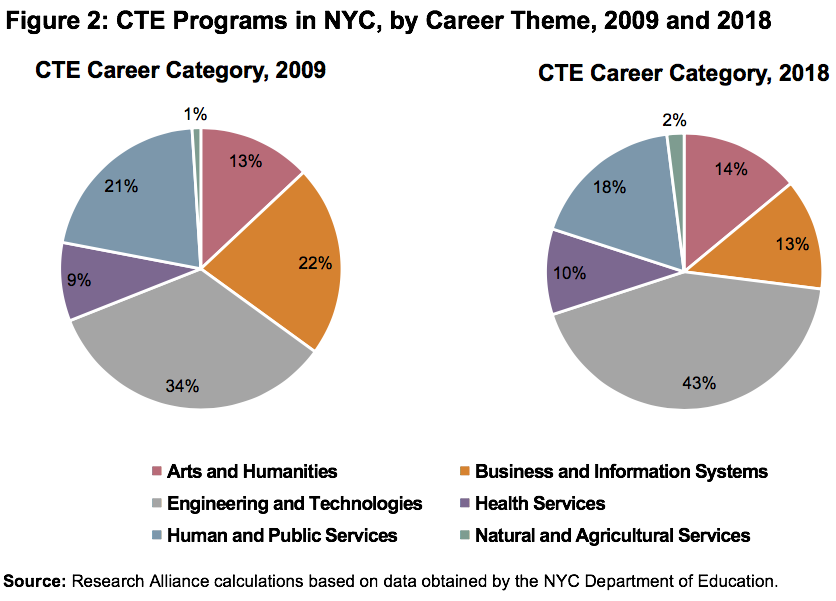 While we don't have comparable data on national trends over time, it appears that the current crop of CTE programs in New York City (and New York State) may be more focused on science and technology than in many other parts of the country. For example, this U.S. Department of Education report found that on average across states, about 35 percent of CTE programs were in STEM or STEM-related clusters—lower than the percentage for New York State and lower than the 55 percent we found for engineering and technology, health services, and natural and agricultural sciences in NYC.[ii]

More broadly, our research is examining what the shifting supply of CTE programs has meant for NYC students and the school system as a whole. A forthcoming paper by Meryle Weinstein, Sean Corcoran, and James Kemple will provide a more detailed description of the evolving market for CTE in NYC. Looking ahead, as the study progresses, we will be turning to a number of other important research questions, such as:

We expect this work to produce valuable lessons and insights for the NYC Department of Education as well as other school districts around the country that are developing and implementing CTE programs.

ii The data in the U.S. Department of Education report were from 2016–17; the career clusters analysis we present here for New York City is from 2017–18.